A Prayer Heeded: A Prayer Series 2

For external links to purchase other formats, click A Prayer Heeded

Book 2 of A Prayer Series

A sweet romance between a Toronto entrepreneur, Adam Gibson, and a Lebanese girl, Rania Ahmed, turns into a nightmare when Adam finds out that Rania’s beauty is cursed and possessed by a four-thousand-year-old Jinn. 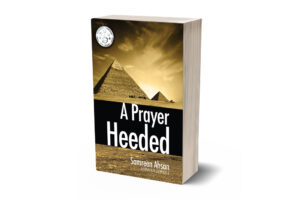 Adam Gibson is a multimillionaire who is not searching for God—or demons—when he finds love with a beautiful woman. Unfortunately, Rania, the one who has captured his heart, has a tormented past. Adam is unaware of his powers, how God makes sure his each prayer is heeded due to his virtue of charity. Adam knows Rania is still the answer to all his silent prayers. But now only time will tell if her soul is destined to be his once again.

Rania Ahmed is dead inside. Adam, the man she mistakenly considered to be her soul mate, has crushed her soul into millions of pieces. Due to her broken past, she still believes her curse will keep her from loving ever again. What she does not know is that Adam has made a promise to himself to never give up on her—no matter what. But Adam does not know what he is getting himself into.

In this spiritual romance, an atheist embarks on a path of enlightenment with a tormented soul who may just have the power to change everything he has ever believed to be true.

There are no reviews yet.

Be the first to review “A Prayer Heeded: A Prayer Series 2” Cancel reply