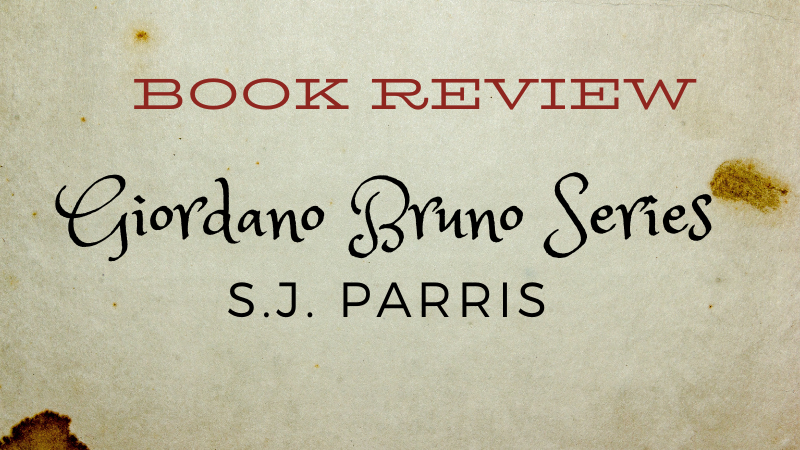 Let me first start by congratulating the writer, S.J. Parris on writing such a mind-blowing series. I’m a history buff and love to read historical fiction, and when it comes to the real characters, wrapped in mystery and intrigues, then it definitely deserves all the stars on my list.

This week I am going to talk about the Giordano Bruno series, which is based on the character of Dr. Giordano Bruno of Nola, who spent most of his life as a fugitive, running away from the Roman Inquisition. Before discussing the books, I want to shed light on the life of Dr. Bruno.

At the age of fifteen, Bruno joined the Dominican order and received scholastic education. But his curious and relentless mind was not confined to living as a monk so it drove him to ask questions—which was not approved by the Church. During his life in the monastery, he even worked on corpses to feed his curiosity, did some surgeries, which was illegal at the time. Later, he was forced to flee Naples with the accusation that he had read heretic materials—books and manuscripts on heterodoxy—and even carried a few. By this time, Bruno’s religious beliefs didn’t align with the Church so he remained a fugitive for the rest of his life, trying to reconcile Catholics and Protestants, based on his theory of Neoplatonism. Bruno’s philosophical ideas made him travel to Rome, Switzerland, France and then England, teaching the art of memory, which eventually led him to earn the favour of King Henri III of France.

The book series is based on the life of Dr. Bruno and his time spent in England and France.

I didn’t start the series in order, but rather, it was a random pick from the library. I started from the last book, which is on his early life as a monk and had me intrigued to read the entire series.

Series in order are:

The Dead of Winter

If you ask me which one is my favourite, it’s hard to answer. All of them revolved around conspiracies of the crown (both for England and France), how religion had a hold of everything and Bruno’s thirst for knowledge and getting access to the blasphemous books and heretic manuscripts—so much that it almost took him to the grave many times.

Bruno had presented many scientific theories which are now exercised in the modern world and yet, he was accused of his heretic idea. Whether his theories led him to burn at stake by Rome or were it due to political reasons, is still open for debate by many historians. Before his sentence, his last words were recorded:

“Perhaps you who pronounce my sentence are in greater fear than I who receive it.”

The series grips you with mystery, court life, religious conflicts presented with historical facts and events and lots and lots of controversy. The life of Dr. Bruno tells us that sometimes too much yearning for knowledge is dangerous.